Last night I saw a film. As I recall it was a horror film…

Of course it was a horror film! Last night Steve and I scoped out the new remake of the Evil Dead. The original films hold a very special place in my heart, as does Bruce Campbell. Because seriously, how is Bruce Campbell not in every lady’s heart? I’ve got a couple of wee spoilers ahead, but really, it’s a remake, so it’s not like I’m telling you anything you don’t already know.

I thought the remake was pretty decent. I liked it. It wasn’t great, though. Honestly I don’t remember if the original is great, or if a comfy gauze of nostalgia has made it that way in my memory. My problem with the remake was that it wasn’t as good as the sum of its parts. The gore was fantastic. The scenes were fantastic. I loved Mia and the premise of her detoxing in the cabin as a viable reason why they couldn’t leave when shit started to get weird. But it the whole movie felt inorganic, that things happened only because they were in a horror movie. Grandpa the dog? You know he’s going to be the first one dead, because he is a dog, and this is a horror film. I appreciated that they used a SUPER FAKE dog puppet for the dead dog. You know some dumbass (and you knew who it was going to be, too) is going to read from the Necronomicon, because this is a horror film, and shit won’t get real unless they do. 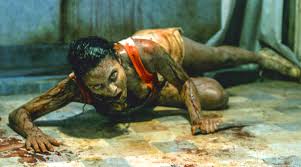 That said, I loved being able to notice items around the cabin and know exactly how they would be used for evil (i.e. carving knife). I loved the adoring nods to the original film. And the gore. Oh god, the gore. It was awesome…except for all the needles. For some reason, this was worse for me than Audition. The fucking needle went into his cheek and snapped off there and he had to pull it out…I actually got a little sweaty in the theater watching that, and maybe feel kinda woozy just typing about it. GAAAAH. It’s certainly the strongest physical reaction I’ve ever had to a horror movie.

I dug it, but none of the characters but Mia mattered to me, and that cheapened the experience. The effects are amazing, the ground trodden is familiar but not beaten to death. It’s absolutely worth watching, especially if you enjoyed the original.