I welcomed in my week of 1960’s movies with Mothra. I’ve never really gotten any of the Godzilla movies, and I knew Mothra was a standalone. I didn’t get this one either. First off, it’s not horror. It’s fantasy, says me. It’s very whimsical and light hearted. Mothra isn’t out to terrorize anyone, she has a very clear agenda, she gets her job done, and she goes home.

Here’s the plot: Japanese and Rolisica (aka US and USSR mashed into one country) go on an expedition to an atomic Polynesian island. They find two tiny women, Shobijin (small beauties), played by “The Peanuts” who are protected by the natives. A greedy Rolisican business man takes the women, guns down the natives, and takes them to Tokyo where he makes them sing in a vaudeville show.

And sing they do. They’re singing to Mothra to come and get them. In a pretty cool scene, they’re singing for wealthy Tokyo (that part reminded me a lot of the gala unveiling of King Kong) and the natives back on the island are doing a “hey Mothra, get up and kick some ass” dance around a Mothra egg.

Mothra wakes up and she’s pissed. Still a caterpillar with bright blue eyes, she swims all the way to Tokyo. She topples the Tokyo tower, the military think they’ve killed her…nope, she’s just making a cocoon. They fire great atomic ray guns at the cocoon, but that only makes her percolate faster. Mothra is one of the cooler looking monsters I’ve seen this fine October, her eyes are kind of like an update of the THEM! ants sparkly eyes. 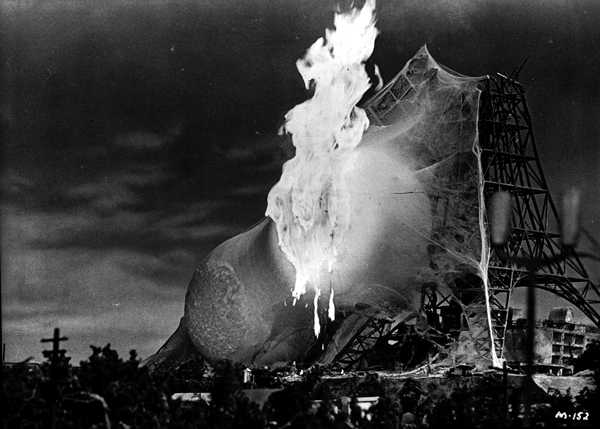 The business man whisks the girls to New Kirk City in Rolisica (which looks a lot like New York City, if you ask me) and Mothra wastes no time following him. The heroes (who are so unremarkable I don’t even remember their names) follow. Meanwhile, the good citizens of New Kirk City have been warned about the business man, and are on the watch. They see him, mob his car, he gets in a gun fight with the cops and dies. The cops hand over the shobijin to the heroes, who use church bells to lure Mothra to air field. Mothra arrives, the shobijin are released, they thank the heroes, and Mothra takes them home to their peaceful atomic island. Mothra didn’t WANT to hurt anyone, it’s not her fault her wings are so big the draft from her flying destroys bridges and sends cars flying.

This movie didn’t really hold my interest. It was cool to watch because it’s such an important part of monster cinema. But she sure does have pretty eyes!