Day 5: Back to giant bugs with 1954’s THEM!. This one was a quintessential 1950’s atomic giant creature movie. The blasts at Alamogordo (9 years earlier) meant that nearly a decade worth of giant ants had been stewing under the desert. They started to kill, people flushed the nest, but two queens managed to escape. One made a tactical error and laid her eggs on a cargo ship and was easily dispatched, the other made a home in the storm drains under Los Angeles. Pretty standard fare: Man meets giant bug, man conquers giant bug. These ants weren’t indestructible, but there were a lot of them. 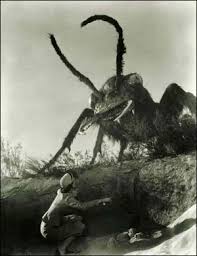 The downfall of the movie, in my mind, is the goddamn sound that the ants made. It was shrill and unpleasant, far more annoying than menacing. It sounded something like a warbling cicada mating with squeaky bicycle breaks. The ants were pretty cool looking, I especially liked their glittery eyes.

The role of government in this film was particularly interesting. The main characters elected to keep the ants a secret at first. The winged queen caused a man to crash his plane. When he told police what he saw, he was taken to a mental hospital. The main characters went to interview him, he told them about the ants, and they recommended that he stay locked up because he was crazy. They said something to the effect of “we’ll tell you when he’s cured.” As for the ants on the tanker? A Navy ship came to the tankers aid, saved two sailors, and sank the tanker. The ship, US government decided, would stay at sea until the crisis was resolved. Then when it was discovered that the ants were in Los Angeles, martial law was declared on the city. The camera showed lots of citizens…but none of them seemed particularly concerned. It struck me as interesting.

The snazziest scene came when the cop, the FBI agent, and the lady scientist with the androgynous name (Pat. Remember Steve from Tarantula?) headed down into the New Mexico nest, wearing gas masks, carrying flame throwers, to see if the queens had gotten away. They’d killed the ants with cyanide gas, and the gas still hung around close to the floor of the nest, like thick fog. The narrow nest hallways were littered with ant corpses, and they looked really cool in the low light. The egg chamber reminded me of that in Alien, though not as menacing.

This is all well and good, but when I think of giant ants, the #1 place my head goes is the ant from Honey I Shrunk the Kids. I, like the rest of you out there, had quite an emotional reaction when brave Antie (Anty?) gave his lift so the kids could survive. I also remember playing on the sculpture of Anty at the MGM studios playground. That was a cool looking ant (and was much friendlier than the ants in tonight’s movie.) If THEM! was made today with new fangled giant ant technology, that would be a hell of a movie! (There are way more images of kids playing on the MGM studios ant than of Anty himself.)

All in all it was a decent, fun movie. Tarantula is still my favorite so far.