I ventured away from bugs big and small with tonight’s selection. This film wasn’t kick ass like Tarantula or Creature from the Black Lagoon, nor was it abysmally horrid like the Deadly Mantis. This 1959 flick was solid mediocrity.

We start out in a psychiatrist’s office. Shrink hypnotizes his nurse and has her tell her story. This bleeds the movie of tension: we know she’s (physically) fine at the end. Yes, she’s repressed this horrid, gator-ridden memory, but we know she’s going to make it at the end of the movie.

Joyce used to be married. The night of her wedding, her husband got a telegram that freaked him out, and he ran away. She spent a long time searching for him, until finally his fraternity gave her his home address, a creepy old plantation out in the bayou. There’s a handyman with a hook for a hand that hates gators. The old lady who owns the plantation tells her to leave, then relents, says she can spend the night if she doesn’t leave her room and if she takes the first train out of town tomorrow. Joyce points out that she isn’t left much choice. She hears gunshots, it’s the gator-hating handyman shooting alligators. Come to find out, this IS her husband’s plantation! There’s also a mad scientist type with a whole bunch of radioactive material. Handyman tries to rape her, husband—who’s horribly deformed with alligator textured skin (but she loves him anyway) saves her. Husband tries to use radiation to turn back to normal, handyman busts in and ruins everything, changing husband into an actual alligator person with the head of a gator. He runs away, she chases him, he wrassles a gator (I think we’re meant to think the gator is attacking him, but really it just looks like he’s harassing the poor thing.) then he winds up in quicksand and dies. Joyce represses these memories, gives herself a new name. THE END. 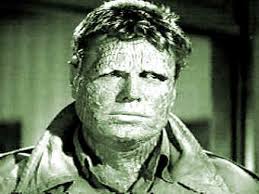 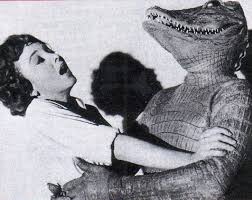 What’s cool is that it’s the rapey handyman who’s the real bad guy, not the alligator people. The alligator people were given alligator hormones to cure terrible injuries. It worked for a while, then they started to mutate. Very monstrous, very sympathetic.

But there wasn’t enough danger or risk, I never cared about the characters. The movie posited alligators as indestructible…they were run over with a truck, shot, wrassled, and they never seemed worse for the wear. I’d say skip this one if you’re in the market for a fun old movie.