Tarantula! Or: Redemption of the Giant Bug Movie

I was pretty skeptical after the disappointment that was the Deadly Mantis. After all, there was no Monster Series book with an orange cover featuring Tarantula.

It was awesome. It had one of the most kick ass opening scenes…both Deadly Mantis and Creature from the Black Lagoon opened with melodramatic voiceovers. Not so for Tarantula. There’s no music. We see a man in his jammies, staggering through the desert. He falls, he struggles to get up, then we see his face is horribly mutated, he’s deformed. Then he collapses. Vultures. Pan up to landscape, pause for a beat, and then the title. Pretty boss.

There’s a mad scientist, a sassy lady scientist named Stephanie, but everyone calls her Steve, a handsome doctor for her to fall in love with. Mad scientist is trying to create a synthetic nutrient, and discovers the way to biggie-size animals. We see a giant rat, a giant guinea pig, and, of course, the next logical animal to biggie-size: a tarantula. Because why not, right? Needless to say, the tarantula escapes. Where the Deadly Mantis features only one scene involving a real mantis and a miniature set (the scene where it climbs the Washington Monument) the only time a real tarantula is not used is for the close ups. The scenes of the giant tarantula gamboling about in the desert are actually pretty cool. It’s pretty standard fare in the second half, tarantula kills, then is thwarted, sorta spectacularly with a bunch of napalm. 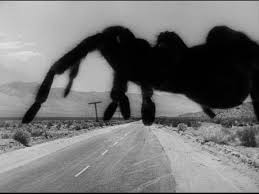 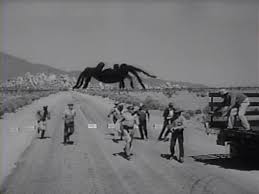 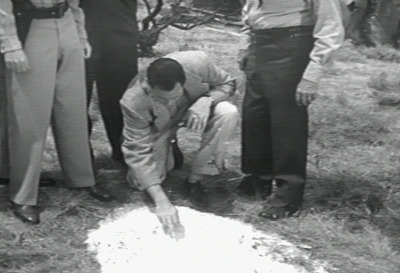 It’s not perfect. There’s adorable 50’s era sexism. At one point she actually says “Science is science, but a girl must get her hair done.” Truer words have never been spoken. There’s also a laughable moment when the mad scientist claims that by the year 2000, the human population will be 3.6 billion people. And the doctor tastes a strange white substance on the ground (spider spooge?) which reminds me of The Stuff. IMDB points out: “At the tarantula’s final size, humans would no longer be a suitable prey for it since more energy would be expended catching and eating such a (relatively) small food source than would be gained from ingesting it.” There’s a scene where the spider peers in the window at Steve. The Gillman peered through windows, as did the mantis…must be a 50’s thing. (Or maybe something to do with director Jack Arnold, who did this and Creature…)

Despite all that, the 1955 giant spider flick has 92% on Rotten Tomatoes. It’s a fun movie that doesn’t take itself too seriously. And it’s available on YouTube!